The magic of Salman Khan 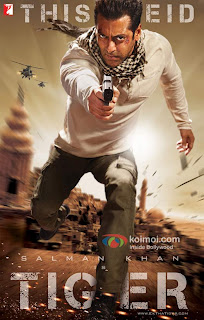 ‘Ek tha Tiger’- was declared a hit even before it was released. How is that even possible? Possible- with Salman Khan it is possible.

I watched the movie on the day of its release and enjoyed it. Only after reading the reviews by movie critics could I find the flaws with the film. It was apparent while watching the movie- but it didn’t really matter and I hardly paid any attention.

I’m not that type usually and need my movies to be engaging. I need the script and the performances to be clever and true. But with some guys like Rajnikanth and Salman Khan these rules go for a toss.

Salman Khan could go dressed in a white sleevless vest and pink pant to a black-tie event and make everyone else look and feel ridiculous. He brings that force of personality on screen and that’s what makes him so entertaining.

Dabangg was the film that converted me. I couldn’t stand the guy before that. But Dabangg had me floored. I can’t imagine anyone else carrying the role of Chulbul Pandey with such élan and with such panache.

Whatever Salman does- he does extravagantly! There is a style and finish to everything that the man does. He understands his quirky mannerisms, and the success of the man has been in being able to make it his strength. However the most endearing part of Salman Khan has to be his confidence. He has super-human confidence in himself and that’s how he’s able to carry out the role of ‘Salman Khan’.

He is probably the only guy who could cavort with his sexy sister-in-law (Munni badnaam!), make us all enjoy it, and then very coolly at the end of the song he says- “Munni- tum jaao Munna ke pass”, in essence telling all of us- who is boss!

We all love the guy coz we all want to be the guy. He projects our alpha-male egos. That’s the aura that the man’s been able to create. That is the magic of Salman Khan.

Well..i am not much into him...but some of his movies like "Wanted" or "Hum Dil De Chuke Sanam" were worht watching...still SRK rocks :)