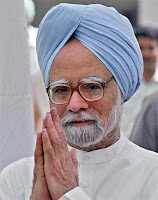 Manmohan Singh is a good man, caught in between a rock and a hard place. His popularity is at an all time low. He’s seen to be weak, incompetent and lacking expression. He’s being attacked from all sides from both within and outside his Govt. Mr Modi (who sees a good shot at the PM post in 2014) has been singling him out in his attacks on the Centre. But, Dr. Singh is a good man.

Dr. Singh should realize that his days as PM are numbered. He’s not likely to be the UPA’s candidate for PM in 2014. He’s what the Americans would call – ‘a lame duck Prime Minister’, waiting for the days to end and the new to come. For long he has been a pawn in the games played by Sonia Gandhi and the Congress. He has willingly submitted himself to the Gandhi family and it’s myriad politicking at the cost of his honour & reputation. I understand the compulsions, but it’s time for him to realize that an incredible opportunity is awaiting and he just has to seize it. At this point of time Dr. Singh has, if you look at it, nothing left to loose.

The Congress has been devastated after the results in the recent state elections. Rahul Gandhi is nowhere near as popular as the Congress would like us to believe. Most of the UPA’s allies, with the exception of the Trinamool, are also in bad shape. Even Mamta Banerjee needs the Centre’s support to off-set the huge budget deficit that her state is ridden with. Mr. Pranab Mukherjee, the only real PM alternative, looks set to be the next President.

Dr Singh needs to seize the initiative and do what needs to be done. We’ve seen sparks of this in the economic reforms of ’91 and the nuclear bill of ’08. We need more of the same. Dr. Singh doesn’t need to be given support. Rather he should demand it. He is an intelligent and honest man- a reputation that he has been able to maintain throughout his tenure. I’m sure he always has the nation’s best interests in mind.

Dr. Singh needs to get aggressive in these last legs of his government. If nothing else but for the legacy he will leave behind. The various economic reforms like the GST, DTC and FDI in Retail and Insurance should be put on the fast track. On the foreign policy front too he should settle the Siachen issue with Pakistan. He should improve relations with China and other BRIC nations. By just annoucing his intent on these issues in strong words he will do much to improve his current ‘paralysed’ image.

Dr. Singh has a chance to prove that he is, after all- ‘A Good Man’.

Email ThisBlogThis!Share to TwitterShare to FacebookShare to Pinterest
Labels: politics

I think everybody thinks that Dr. Singh is a good person and that's why everybody expects from him to do something. He is one of the most educated prime minister of India but still he is puppet of Congress.

@Ankit
True that. It is rather unfortunate. I hope he finds the strength to fight back. We need the guy.